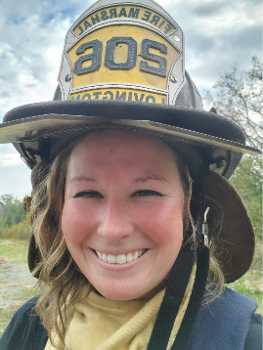 Brittany Brown works at Eastern Kentucky University, College of Justice and Safety, working primarily within the Fire Protection, Safety, and Engineering Technologies Program as an Associate Professor.  Brown has previously served as the Fire Marshal and Training Officer for the Lovington Fire Department in Lovington New Mexico and as the Team Chief for the Lea County Arson Task Force.  Brown has also worked for the State of Texas as a Deputy State Fire Marshal, Code Enforcement Bureau, and as a Deputy State Fire Marshal for the New Mexico Fire Marshal’s Office in the Fire Investigation Bureau.  Brown has also spent time working for the Clovis Fire Department in Clovis, New Mexico, and the Farwell Fire Department in Farwell, Texas working in fire investigation, firefighting, and emergency medical services capacities.

Brown is currently the Vice President for the New Mexico Fire Marshal’s Association and works as an adjunct instructor for the New Mexico Firefighters Training Academy and The National Academy. She also teaches for the Southern California Safety Institute and the National Fallen Firefighters Foundation.
Brown holds a dual Bachelor of Science in Aviation Maintenance Management with majors in Aviation Management and Aviation Safety with an Undergraduate Specialization in Aviation Safety.  Brown also holds a Master of Science in Systems Engineering with a technical specialization from Embry-Riddle Aeronautical University.  She is currently pursuing a Doctorate at Oklahoma State University in Forensics with a concentration in Arson, Explosives, Firearms, and Toolmarks (AEFTI).

Brown serves as a board member on the Crime Scene Scientific Area of the Fire and Explosion subcommittee for the Organization of Scientific Area Committees for Forensic Science (OSAC).  She has also served as a principal member for the NFPA 407 Technical Committee for the Standard on Aircraft Fuel Serving and the NFPA 410 for the Standard on Aircraft Maintenance Operations.  In addition, Brown serves as an Advisory Board Member for the Forensic Fire Analysis Institute and as a committee member for the Fire, Performance, and Wildland Interface Code Interpretation Committee for the International Code Council (ICC).  Brown is also a principal committee member for the International Society of Fire Service Instructors, on the Online Education Committee, to provide training on an international platform.

Before entering the Fire Service, Brown served 10 years in the United States Air Force as an enlisted Aerospace Maintenance Craftsman and Flight Mechanic.  During this tenure, she operated with the Flight Safety Department as an Aviation Crashworthiness and Survivability Analyst and Fire and Explosion Mishap Investigative analyst participating in several large-scale aviation mishaps.